When operating properly, the alternator (LiMa) provides the required direct current in the vehicle and simultaneously charges the car battery. If the LiMa does not fulfill this task, the car’s power supply will break down sooner or later. That is why the functionality of the LiMa is displayed from the cockpit via the charge control light (LKL). If the ignition is switched on before the engine starts, the display lights up because all consumers are only supplied with energy via the battery. If the engine is started, the LKL goes out again because the supply and charging current is now provided directly by the alternator.

Read more: How to test your alternator: TROUBLESHOOTING

Checking the alternator – a job for professionals 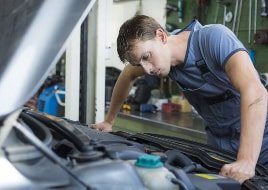 In addition, the workshop offers the best conditions in the event that the alternator has to be removed or replaced. But before the alternator is really replaced, the fault must first be found. It may not be necessary to change, but the damage can also be repaired this way.

Read more: 7 reasons why the battery light is on

Checking the alternator without a measuring device 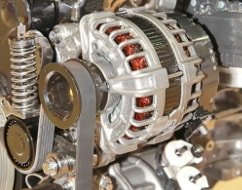 If troubleshooting during the visual inspection of the alternator is unsuccessful, the experts test the DC alternator for common defects. Here, the damage profile gives the specialist important clues. The testing includes, for example, the function of the charge control lamp itself, the examination of any interrupted cables or corroded connections or the identification of defects in the generator’s regulator. If the charge indicator lamp lights up or glows continuously while driving, a short circuit to ground could also be the problem for the defect.

Check the alternator with a measuring device

If the problem is not found during the optical and mechanical test, the expert will pick up his measuring device. This will measure all components of the alternator.

The use of the multimeter begins with measuring the charging voltage that is emitted by the alternator. To measure the charging current of the alternator, a test run is carried out at idle and once at a speed of 4,000 revolutions per minute. If no DC voltage is measured in one of the two test measurements, the alternator is defective.

Is the alternator or regulator defective? Testing the voltage difference

If everything is OK at this point, the specialist measures the voltage difference between the alternator and the battery. Conclusions about the cause of the error can also be drawn from these values. A working alternator has a voltage between 13.8 and 14.4 volts. If the voltage arriving at the battery is more than one volt lower when the loads are switched on, the fault is most likely to be found in the cabling. If, on the other hand, the voltage on the alternator is significantly higher, the cause of the defect is more likely to be found in the alternator regulator. The alternator regulator – regulator for short – is responsible for regulating the charging current and protecting the on-board network from excessively high voltages.

Read also: how to test car alternator without meter

Measuring the alternator with special equipment 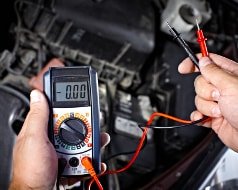 If the defect in the alternator has still not been identified after these tests and efforts, the expert in the workshop will use an oscilloscope and clamp meter. With this equipment, he is able to measure individual currents in the vehicle. An oscilloscope visualizes the course of the measured values. The charging current of the alternator is measured, and the so-called quiescent current and the excitation current are also subjected to a test. The expert can also use the oscilloscope to analyze whether the so-called harmonic ripple is within the ideal range. This tells you whether the vehicle’s voltage regulator is working properly. Any fault on the alternator should be discovered at the latest during these special tests.

clutch components and their functions

How to perform a wheel alignment at home

How to change your passenger compartment filter